Get Involved: Join the NAACP as we stand for Civil Rights. Donate Today
Close
< Back to Latest

Check out this weeks news articles featuring the NAACP 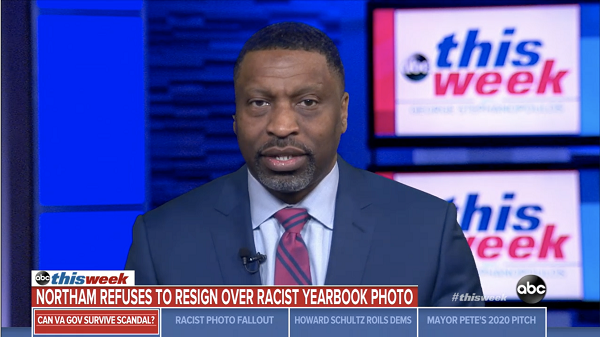 ABC News (VIDEO): NAACP president: I don’t see how Northam can survive racist yearbook photo fallout
Derrick Johnson, the president of the NAACP, said on Sunday that he doesn’t see how Virginia Gov. Ralph Northam can survive the fallout of a racist yearbook photo that emerged on Friday. He told ABC News Chief Anchor George Stephanopoulos on “This Week” that the explanation Northam offered in a news conference Saturday doesn’t make a difference “at this juncture.” | Tweet this

USA Today: Biden, NAACP, more: Calls for Gov. Ralph Northam to resign persist for second day
The NAACP’s President and CEO Derrick Johnson agreed in a written statement, saying, “Black face in any manner is always racist and never okay. No matter the party affiliation, we can not stand for such behavior, which is why the NAACP is calling for the resignation of Virginia Gov. Ralph Northam.” | Tweet this

Democracy Now (VIDEO): As Virginia Governor Waffles on Blackface Yearbook Photo, NAACP Leader Calls His Apology “Invalid”
Democratic Virginia Governor Ralph Northam is facing calls to resign after a photo surfaced on his 1984 Eastern Virginia Medical School yearbook page showing a man wearing blackface posing next to a man wearing a Ku Klux Klan outfit. Northam apologized for the photo on Friday, but walked back his statements on Saturday, claiming neither of the men in the photo was him. He did admit to using blackface to portray Michael Jackson at a dance contest. We speak with Reverend Kevin Chandler, president of the Virginia State Conference of the NAACP. | Tweet this

The Washington Post: Gov. Ralph Northam admits he was in 1984 yearbook photo showing figures in blackface, KKK hood
“Black face in any manner is always racist and never okay,” tweeted Derrick Johnson, president of the NAACP. “No matter the party affiliation, we can not stand for such behavior, which is why the @NAACP is calling for the resignation of Virginia Governor @RalphNortham.” | Tweet this

Huffington Post: Trump’s Pick To Replace Brett Kavanaugh Could Face An Ugly Confirmation Fight
“Neomi Rao is the last person who should sit on this court,” said NAACP President and CEO Derrick Johnson. “The Rao nomination is an insult to communities of color, women, persons with disabilities, and the LGBTQ community. In truth, the nomination is an insult to all Americans.” | Tweet this

MSNBC (VIDEO): NAACP’s Johnson says Northam’s blackface in yearbook is racist
MSNBC’s Kendis Gibson interviews NAACP President and CEO Derrick Johnson about Virginia Gov. Ralph Northam’s refusal to resign after it was discovered that there was a racist photo on Northam’s medical school yearbook page. Northam now says he’s not either of the people in the photo, but that he wore blackface once on a separate occasion and regrets it. Johnson says Northam should resign. |Tweet this

The Hill: NAACP calls on Northam to resign over blackface photo
The NAACP called on Virginia Gov. Ralph Northam (D) to resign Friday after he admitted he appeared in a picture showing a man wearing blackface and another dressed in a Ku Klux Klan robe. | Tweet this

WCPO Cincinnati: Blackface should be career-ending mistake, says NAACP director
“The thing about those in blackface is it is a stereotype that’s usually someone getting dressed up along those lines and presenting a very ignorant, uninformed and otherwise derelict perspective,” Shelton says. Shelton feels too many people of the younger generation don’t have an understanding of that history. | Tweet this

NBC News: She Thrives: Tiffany Loftin: Raising her voice to make sure young black people’s lives matter
Tiffany Loftin, director of the National Association for the Advancement of Colored People’s youth and college division, brought more than 1,000 students to participate in the March for Our Lives in Washington, D.C., in March 2018. | Tweet this

NAACP LAUNCHES ALL IN CAMPAIGN, TO RECRUIT, RETAIN AND ENGAGE NEW MEMBERSHIPS